Henry Gay shares a few of the letters Graham Kennedy wrote to him during their 50 year friendship.

It began in 1951 but, as so much has been written about the King of Australian Television , Henry decided to reveal a few odd things about other people who crossed his path and a little bit of history about working in radio when it was called wireless.

Graham Kennedy…if you live outside of Australia you may never have heard of him….to Australians in the pioneering days of Television in the mid to late 50’s Graham was an absolute legend.

His blue eyes sparkled……much of his patter was unscripted…he did the unexpected and his audience loved it all. Graham kept out of the public eye in his private life….of course as he did not marry this led to all sorts of rumors, and now a person who knew Graham very well Henry Gay has released this fascinating look into Grahams’ innermost thoughts.

I know Henry personally and he has been working on this book for many years…..it is well worth reading and perhaps THE only genuine account of Graham Kennedy every put to paper.
Henry Gay is an accomplished author…He also writes plays and for many years was also in the Melbourne Radio / Television Industry. 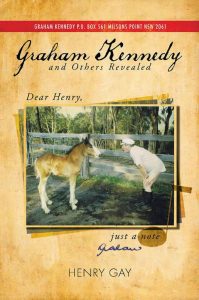 Graham Kennedy and Others Revealed
by Henry Gay (Author)
3 editions

Graham Kennedy first appeared in print way back in 1965, featuring in daily newspapers and magazines. Books were written about Graham and then books were written by Graham. BOOK's @ END_OF_DOCUMENT_TOKEN_TO_BE_REPLACED