Graham describes in detail his love of the city he grew up in, along with detailed descriptions accompanying the photographs. 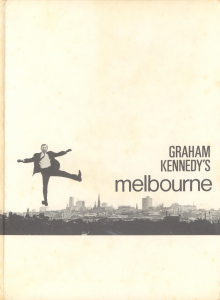 In the opening forward he says:

Well, it’s my turn to make an admission

I’ve been conducting a secret and very satisfying love affair for years.

With whom you ask?  No, you cynics, it’s not with Graham Kennedy.

It’s with my one and only love: that haughty dignified dame – Melbourne.

He goes on to explain in surprising frankness and detail that Australia, in particular, Melbourne is his preferred place after travelling to cities around the world.

This book is no longer in print.  Copies can only be purchased second-hand.

Graham Kennedy first appeared in print way back in 1965, featuring in daily newspapers and magazines. Books were written about Graham and then books were written by Graham. BOOK's @ END_OF_DOCUMENT_TOKEN_TO_BE_REPLACED