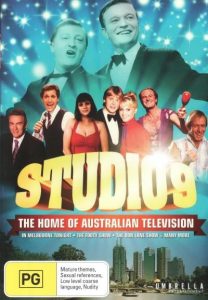 A retrospective look at some of the greatest live-to-air moments in Australian television history, Studio 9 celebrates the spirited and impromptu jocularity that became a mainstay for households throughout the nation and set the standard for home entertainment well before the advent of VCRs and DVDs.

From famous on-screen partnerships – Graham Kennedy and Bert Newton, Ernie Sigley and Denise Drysdale, Paul Hogan and Strop, to the rise of talent shows such as New Faces as well as the many controversial on-air moments, every facet of Channel 9’s bejewelled crown of live entertainment is explored in sparkling detail.

Customer Review
By Linda on October 18, 2015
Take a trip down memory lane with this great look back at some of the most iconic shows and people on Australian television.
You will not be disappointed – I wasn’t!

Graham Kennedy first appeared in print way back in 1965, featuring in daily newspapers and magazines. Books were written about Graham and then books were written by Graham. BOOK's @ END_OF_DOCUMENT_TOKEN_TO_BE_REPLACED