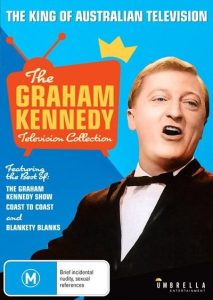 The King of Australian television captivated audiences with his outlandish behaviour and quintessential Aussie charm.

This ultimate collection of 9 discs showcases some of ‘Gra Gra’s’ crowning TV moments paying tribute to one of Australia’s all-time greats. From his ground-breaking work on GTV-9’s In Melbourne Tonight to The Graham Kennedy Show and Coast To Coast his achievements have been many and justly celebrated, to the tune of 5 Gold Logie Awards.

BEST OF GRAHAM KENNEDY: Hosted by respected Channel 9 personality Ray Martin, this program explores Graham Kennedy’s ever spontaneous jocularity in sketch comedy, with excerpts taken from IMT, Blankety Blanks, Coast to Coast, The Graham Kennedy Show and a rare in-depth interview with the man himself on his life and career.

THE GRAHAM KENNEDY SHOW: Featuring his very first live AO rated (adults only) transmission in Australia, which opened the floodgates to Graham’s unique blend of humour and controversial observations. In the wake of Graham’s infamous ‘Crow Call’incident, also included is the rarely seen and totally uncut 1975 episode of the ‘Criticism of Doug McClelland’. Supported by the likes of Bert Newton, Rosemary Margan and Pete Smith each episode is a tantalising peek into Australian television past.

Graham Kennedy first appeared in print way back in 1965, featuring in daily newspapers and magazines. Books were written about Graham and then books were written by Graham. BOOK's @ END_OF_DOCUMENT_TOKEN_TO_BE_REPLACED