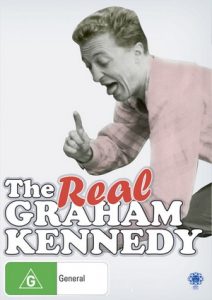 TV history will reveal that there were two Graham Kennedys

This is not just another re-hashed TV special – but a new, rare insight into the boy from Balaclava – who became the undisputed “King of Australian Television”. produced by Bob phillips, one of the producers from Kennedy’s break-thru Channel 9 program ‘In Melbourne Tonight’

Graham Kennedy first appeared in print way back in 1965, featuring in daily newspapers and magazines. Books were written about Graham and then books were written by Graham. BOOK's @ END_OF_DOCUMENT_TOKEN_TO_BE_REPLACED