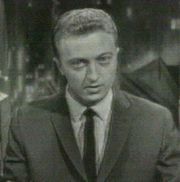 Trivia purists might insist the GTV9 show bearing this title first aired on Sunday January 20 1957 and was hosted by Geoff Corke. It ran half an hour and lasted just two editions.

Archivists and millions of Melbournians prefer to recall the variety show of the same name that debuted several months later (on May 6th) and starred a young radio announcer named Graham Kennedy. It ran fourteen years, became the benchmark for all Australian tonight shows and made Kennedy the biggest star local television has produced. To be accurate, In Melbourne Tonight saw many personalities in the host chair over the years. but there’s no denying whose show it was.

Graham Kennedy was born in the Melbourne suburb of Balaclava in 1934 (he shared a February 15th birthdate with that other Australian showbiz legend of an earlier era, Roy Rene “Mo”). Leaving school in his mid-teens, he worked as a news runner for the A.B.C. before getting a job in the 3UZ record library and ultimately ending up on air with top radio man Cliff “Nicky” Whitta.

Nicky was a master at personalizing the advertisements for his listeners, and the style soon rubbed off on his young cohort. With television due to begin in late 1956, Nicky and Graham were expected to be a leading duo on the new medium. But fate decreed otherwise … two months before transmissions began, Whitta died of a heart attack.

As the saying goes, “the show went on” with a nervous young Kennedy appearing solo as host of a five nights a week variety programme. At the time, there weren’t many sets in use (other than those in electrical shop windows) to watch the people on both sides of the camera conquer their inexperience.

That first year Graham and offsider Geoff Corke pretty much made up any humorous banter to link commercials and the musical items. Unlike its American prototypes, Kennedy was uneasy as an interviewer and decided he’d prefer to take part in comedy sketches instead (like his childhood heroes on stage at the “Tiv”).

Within twelve months, ex-vaudeville comedian Joff Ellen had joined the team to help recreate dozens of old sketches he’d worked on during his career. As television gradually took over from radio in suburban living rooms, the advertising dollar allowed production budgets to increase. I.M.T. boasted an orchestra (headed by Arthur Young), a chorus and ballet, and by the turn of the decade had built up a supporting cast that included American stage performer Evie Hayes, Toni Lamond, Irish vocalist Bill McCormack, Hal Todd, Jack Little, Barry McQueen, Phillip Brady and singers Elaine McKenna, Diana Trask and Dorothy Baker. Many of the these regulars (along with children’s show star Happy Hammond and newsreader Eric Pearce) acted as stand-in hosts when Kennedy was on holiday or on an overseas trip.

A feature which soon became an institution on just about every Channel 9 tonight show from that day forth was the barrel segment, which over the years presented a number of models turned hostesses, The most famous was undoubtedly Panda (Lisner) who developed a lively repartee with the host, and eventually snared a well-funded contract to entice her to defect to rival HSV7. Later prize-readers included Jennie Ham and Honnie Van Den Bosch. One of Kennedy’s early rivals was Bert Newton on Channel 7’ s Late Show, but he resigned from the station in March 1959 and was snapped up by In Melbourne Tonight soon after. As one of Australian television’s perennials, the longevity of the Newton career has few parallels, but his years as Graham’ s chief foil must rank as a high point of the local industry.

By the start of 1960, Kennedy had become the medium’s top performer and three years of Monday to Friday exposure was beginning to drain his creativity and he wanted more of a life away from the cameras. It was decided to limit his appearances to three nights a week (with Newton eventually taking over the other two). Channel 9 was also eager to introduce him to Sydney viewers and a special one hour Friday edition (retitled The Graham Kennedy Show) was produced for both cities. In addition, a local 30-minute extension aired for Melbourne audiences following the national programme. Throughout its run, comedy was a major part of I.M.T. and by the early sixties Fred Parsons (chief writer for Roy Rene, and co-creator of radio’s legendary “McCackie Mansion”) was hired to help supply a steady input of material. In later years, the tradition continued with English writer-performer Johnny Ladd and Mike McColl Jones.

On the performing side, Joff Ellen had been joined by Rosie Sturgess (who, like Ellen, had worked on stage with such theatrical greats as George Wallace). For brief periods, Buster Fiddess and Jackie Clancy deserted HSV 7 to appear on the programme. One of the most popular regular routines featured Graham and Rosie as elderly pensioner couple “The Wilsons”. As the toothless old reprobate in constant need of laxative assistance, Kennedy was forever milking every nuance for a laugh and along the way causing a great deal of ‘breaking up’ mid-sketch. The segment also had a catchphrase “It’s a joke, Joyce” in response to one of George’s unsuccessful attempts at wit, an expression which has since entered the Australian idiom.

Despite the continuing popularity in Melbourne, Sydney audiences were not won over by Kennedy’s talents and Newton took over the national show for a time before the idea was finally abandoned after a two year run. From early 1963, the Friday In Melbourne Tonights became the domain of Noel Ferrier who (along with Mary Hardy and Fred Parslow) presented a programme with a more theatrical style in a venture which lasted until mid-1965, after which Channel 9 dropped the show from that night of the week altogether. Health problems forced Bert Newton off television in early 1964 and his edition was taken over for the rest of the year by Tommy Hanlon Jr. In 1965 Jimmy Hannan replaced him, before making way for Ted Hamilton for several months. Phillip Brady eventually assumed the host role in 1966 with Mike Preston taking charge two years later.

Meanwhile, a further attempt was made to break down the traditional interstate rivalry by having Graham and New South Wales host Don Lane engage in special co-axial cable linkups but it would take until the 1970s for him to be accepted by viewers in the harbour city. Graham hosted three I.M.T.s a week until the end of 1968. Channel 9 was happy to agree to increased salary demands from his new manager Harry M. Miller lest he desert the network for one of the many lucrative offers being made by rival stations. The industry not only valued his comedic talents; his advertising skills (well-developed in his days with Nicky) meant solid response at the cash registers.

As the sixties drew to a close, Kennedy was growing tired of the treadmill. Financial inducements lured him back for two-nights-a-week appearances in 1969 (with Bert Newton finally returning to the host’s chair, and Preston continuing on with the fourth edition), but by the end of the year Graham had had enough. Though he’d return with ventures titled The Graham Kennedy Show in 1973 and in 1975 (made notorious by a “crow call” and management censorship) he’d fronted his last In Melbourne Tonight.

As a result, the 1970 model I.M.T. featured a roster of four hosts: Ugly Dave Gray, Stuart Wagstaff, Bert Newton and Jimmy Hannan. But it was not destined to be successful quadrella and a little over a year later all four had gone, and an institution named In Melbourne Tonight was no more.

This excellent article was written by Peter Tatchell | laughterlog.com

Graham Kennedy first appeared in print way back in 1965, featuring in daily newspapers and magazines. Books were written about Graham and then books were written by Graham. BOOK's @ END_OF_DOCUMENT_TOKEN_TO_BE_REPLACED